They were made to forget. But they’ll never forgive.

Everything about Anna’s life is a secret. Her father works for the Branch, at the helm of its latest project: monitoring and administering treatments to the four genetically altered boys in the lab below their farmhouse. There’s Nick, solemn and brooding; Cas, light-hearted and playful; Trev, smart and caring; and Sam . . . who’s stolen Anna’s heart.

When the Branch decides it’s time to take the boys, Sam stages an escape. Anna’s father pushes her to go with them, making Sam promise to keep her away from the Branch, at all costs.

On the run, with her father’s warning in her head, Anna begins to doubt everything she thought she knew about herself. She soon discovers that she and Sam are connected in more ways than either of them expected. And if they’re both going to survive, they must piece together the clues of their past before the Branch catches up to them and steals it all away. 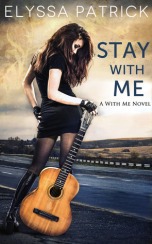 New Adult/Contemporary Romance – recommended for ages 17 and up.

With one kiss, it changes everything between us . . .

I’ve been famous since I can remember. Singing, acting, dancing—I’ve done it all. The tabloids cover my every move, but I don’t want that anymore. I want to be normal, whatever that is.

When I leave Hollywood for college in Vermont, I’m on my own for the first time in my life. This is my chance to figure out who I am and what I want in life.

But it’s a lot harder than I expected. I can’t escape my image. Classes are difficult, and I’m struggling. And then there’s Caleb Fox.

Caleb is the one man who doesn’t want to use me. He breaks down my walls. He challenges me. He wants me. And I just don’t know if I can give him the same—or if he’ll stick around when he finds out my shameful secret that the tabloids haven’t managed to uncover.

Dating him is risky enough, but loving him could break me.

“I’m not sure what possessed me to do it. Maybe it was the impossible expectations I faced, maybe it was my own self-loathing. But I just knew I needed something different to happen. I needed someone… something… to derail me from my current path. Otherwise, I would become lost… a hollowed out shell of a man. So I did it. I approached her, then I pursued her, then I made her mine. And my life was saved…”

Ryan Burnham is the privileged son of a U.S. Congressman and captain of his university’s hockey team. While he is on the verge of fulfilling his dreams to play in the NHL, his parents want him on a different course. One he is expected to accept for the sake of his family’s public image.

Forced her to abandon her music career after the heart breaking death of her parents, Danny Cross exists on the opposite side of the tracks from Ryan. She is struggling to make her own way, working two jobs, attending college part time and volunteering in a homeless shelter. She is on a mission to build her own success.

With a chance meeting, their vastly different worlds collide, causing each to evaluate whether they are truly on the correct path to self-fulfillment and happiness. Can their relationship survive? Particularly when others are against them every step of the way. A lot can happen in just ten short days…

Getting pregnant as a teenager and being coerced into giving her baby up for adoption left a festering scar on Jaymee Ballard’s life. Trapped by poverty and without many allies, Jaymee nearly gives up hope of getting her daughter back after her best friend is murdered. Now, four years later, a wealthy woman with legal connections hires her as a housekeeper, and Jaymee gathers the courage to seek her help. But Jaymee’s last chance ends up in a puddle of blood in one of the historic antebellum mansions in Roselea, Mississippi.

I just murdered your wife…again.

An unsigned letter consisting of six horrifying words turns Nick Samuels stagnant life upside down. Stuck in emotional purgatory since his wife’s unsolved murder four years ago, Nick is about to self-destruct. The arrival of the letter claiming credit for his wife’s murder and boasting of a new kill sends Nick to Roselea, where he and Jaymee’s worlds collide.

Jaymee and Nick realize exposing the truth about her daughter’s adoption is the only way to solve the murders. Up against years of deception, they rush to identify the killer before the evidence–and Jaymee’s daughter–are lost.

But the truth doesn’t always set the guilt-ridden free. Sometimes, it destroys them.

In this provocative cautionary tale for teens, the sequel to Awaken, seventeen-year-old Maddie’s rebellion against the digital-only life grows dangerous. Maddie is in Los Angeles, trying to stay out of trouble. But one night, a seemingly small act of defiance lands her in the place she fears the most: a detention center. Here, patients are reprogrammed to accept a digital existence. Maddie is now fighting for her mind, her soul, and her very life. Once again, Katie Kacvinsky paints a disturbing picture of our increasingly technology-based society

I would love to hear your suggestions!