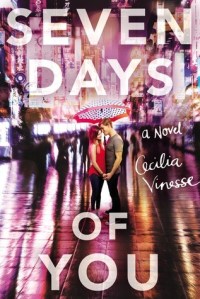 Sophia has seven days left in Tokyo before she moves back to the States. Seven days to say good-bye to the electric city, her wild best friend, and the boy she’s harbored a semi-secret crush on for years. Seven perfect days…until Jamie Foster-Collins moves back to Japan and ruins everything.

Jamie and Sophia have a history of heartbreak, and the last thing Sophia wants is for him to steal her leaving thunder with his stupid arriving thunder. Yet as the week counts down, the relationships she thought were stable begin to explode around her. And Jamie is the one who helps her pick up the pieces. Sophia is forced to admit she may have misjudged Jamie, but can their seven short days of Tokyo adventures end in anything but good-bye?

Seven Days of You  is a debut story about a girl, Sophia, spending her last seven days in Tokyo before returning the United States. Seven days to say goodbye to her friends, her crush and her home, everything is great, or so Sophia thought, till Jamie shows back up in Tokyo, ruining her last week with friends.

Sophia and Jamie are your typical friends who might be something more. I liked their dynamic of going form not wanting to be near each other to realizing that things did not end the way they should have when Jamie left Tokyo before.

Sophia is portrayed as your normal teenage girl who puts off packing until the last minuet opting to spend time saying goodbye to her friends, dealing with her depressed sister and thinking about maybe staying with her estranged father.  I was not overly fond of Sophia’s sister and her negativity, and I was a little weary of the way things went down with Sophia’s friends, especially where her other friends are concerned.

This book definitely spoke to the reader about how relationships turn from one moment to the next.

I really thought the setting was cool. I have never been to Tokyo, but I could see the places that Sophia was going in my mind as they were described. It was a great way to bring the reader into the story.

I am the type of person that wants the Happily Ever After for pretty much every book that I read. I also tend to have a problem with books that to me just end, and to me this book really just ended. Maybe with the option for a sequel. All and all Ms. Vinesse did an amazing job with this fast paced debut. It was a definite quick read.