So I’ve been reading a lot of good books lately and have not reviewed half of them, so I thought I’d come up with a quick way to review them. So I decided to start Just a Minute, Book Reviews in a Minute, meaning I’m giving myself 1 minute to write a review for books that I probably will not write a full review for. This way I can show my love or disappointment, without feeling like I am repeating myself in a full length review. Hopefully this will help me review more of what I read. So here goes. 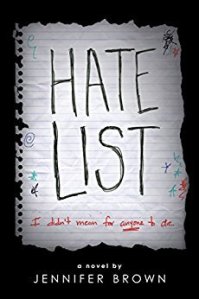 Five months ago, Valerie Leftman’s boyfriend, Nick, opened fire on their school cafeteria. Shot trying to stop him, Valerie inadvertently saved the life of a classmate, but was implicated in the shootings because of the list she helped create. A list of people and things she and Nick hated. The list he used to pick his targets.

Now, after a summer of seclusion, Val is forced to confront her guilt as she returns to school to complete her senior year. Haunted by the memory of the boyfriend she still loves and navigating rocky relationships with her family, former friends and the girl whose life she saved, Val must come to grips with the tragedy that took place and her role in it, in order to make amends and move on with her life.

I have to say when I saw this on Bookbub and Amazon I was not sure I wanted to read this. The last book I read about a school shooting I was not that fond of, but this one was different. Instead of the story being entirely about the events leading up to the shooting, we get to see what happens int he aftermath. Val is the girlfriend of the shooter and through her eyes we get to see how these events not only affected her, but her family and the entire school and community.

Title: Between the Raindrops | Goodreads |

Seventeen-year-old Scout Ramsey’s life is a mess. With a dead father and a junkie mom, she can’t imagine things can get worse.

Then her mother tries to sell her for a bag of meth.

After her mom’s arrest, Scout’s forced to switch schools in the middle of senior year. Scared and alone, she pours her heart into her journal and dreams of the day she turns eighteen.

For Wyatt Campbell, senior year is predictable purgatory. Then the new girl steals his seat in history class, and suddenly, school’s not so bad. They bond through their love of music, and Wyatt finds himself falling hard for the journal-loving girl with the sad blue eyes.

Wyatt’s heard the rumors. He knows Scout’s had it rough.

He’s determined to be the one thing in her life that’s easy.

In this captivating teen novel, Sydney Logan weaves a touching story that tackles the heartbreak of addiction, the power of forgiveness, and the wonders of first love.

The description of this one is what made me want to read the story. I wanted to know about Scout’s life, and how Wyatt played into it. Both Scout and Wyatt were relatable characters, which I liked. Made it easier to read. I will say that there were parts of this story where I wanted to slap someone, but it was realistic. The relationship between Scout and Wyatt was amazing. I liked that it was not rushed or forced. It happened, and it may have been the best thing to happen to Scout in a long time.

Title: All The Broken Pieces | Goodreads |

What if your life wasn’t your own?

Liv comes out of a coma with no memory of her past and two distinct, warring voices inside her head. Nothing, not even her reflection, seems familiar. As she stumbles through her junior year, the voices get louder, insisting she please the popular group while simultaneously despising them. But when Liv starts hanging around with Spencer, whose own mysterious past also has him on the fringe, life feels complete for the first time in, well, as long as she can remember.

Liv knows the details of the car accident that put her in the coma, but as the voices invade her dreams, and her dreams start feeling like memories, she and Spencer seek out answers. Yet the deeper they dig, the less things make sense. Can Liv rebuild the pieces of her broken past, when it means questioning not just who she is, but what she is?

I’m not sure how I stumbled upon this book, but the synopsis is what drew me in when I found it. It was interesting to watch as Liv came to grips with the parts of herself that she might not remember after the coma. There was a bit of mystery in this one as Liv and Spencer work to find out not only what Liv’s parents are hiding, but more about what happened before the accident, and where the voices and dreams are coming from. I will say that twist towards the end blew me away. I did not see it coming.

So there you have it. My first foray into writing reviews in only a minute. I have to admit it’s a lot harder than you think, and I was sure that my stopwatch on my phone was going faster than it should.

Have you read these books? Could you review them in a minute only?